Well, summer is not even half over and I’ve already had 2 life changing experiences.  The first was the singing-camp I just wrote about in the previous blog, and now, I have to say the same has happened after a week of being band coach at GIRLS ROCK CAMP VANCOUVER!!!

What an amazing opportunity for these girls.  I kept saying, “if only I had had the chance to do something this!”, but in reality, I have been able to experience GRC, It just so happens that I am of 40 years instead of 9.  I still got to benefit from such a positive environment for self awareness, identity awareness, and a deeper understanding of power, diversity and anti-oppression.

This is what Girls Rock Camp Vancouver says:

“Girls Rock Camp Vancouver is a project for female youth aged 8-17. We believe that every person deserves to love and believe in themselves regardless of economic status, sexual orientation, gender, race, religion or size and that every person deserves the opportunity to develop the necessary skills to move through their lives with success and confidence. By creating an environment that respects and fosters diverse learning styles and holds space for diverse forms of information processes and expression we hope to encourage female youth to respect each other’s differences. Through collective collaboration in song writing, learning and engaging with music, participants increase their self-esteem, broaden their identity, increase communication and learn new skills. While collaborating with their band and during our various workshops, campers share stories of their experiences and increase awareness and compassion for each other. Through art based learning, young women build trust, connections to the community, empowerment, and valuable support that’s lends them the necessary tools to help them through challenges.”

First of all, the shenanigans went down at UNYA (Urban Native Youth Association) on unceded Coast Salish Territories, specifically the Skwxwú7mesh, Xwméthkwyiem and Tsleil-Waututh peoples. On day one of rock camp we played a game which helped us somewhat organically form bands around what types of music we were drawn to.  The participants had decided which instrument they were going to focus on when they signed up for the week and in each band there was one drummer, and then a bass player (if you got one, as there weren’t enough for each band), keys, guitar and vocals.  My group formed with Brydie on vocals, G (Guadalupe) on Bass, Beatrix on drums, Quincy and Isla both on keys, and Erica as the band manager.  We were considered the “Sonic Youth” age-group, which was between  7 and 11 years of age.  At lunch we were treated to some live music played by singer/songwriter Ora Cogan, and then had the opportunity to participate in a song writing workshop facilitated by her.  The later afternoon consisted of quiet band practice where we began writing lyrics to a song, designed a band logo (with G’s drawing talent) and unanimously agreed on our name:  “They Sea in Purple”. Then came loud band practice where we began working on playing the song we were creating.  Woah! It was loud and very chaotic! I really thought i might be over my head and realized what a challenge this was with a group of very energetic gals who where excited about exploring their individual sounds at a very high volume.  The real challenge though, was the fine line in me using my skills to facilitate the implementation of their own ideas, as opposed to me just showing them how to make it sound good.  This came with a lot of questions posed to them such as; How did that sound to you?  Why do think it sounded that way?

Everyday after the first consisted of instrument instruction in the morning where the girls where divided up to have classes on which ever instrument they had chosen, a lunchtime guest band while they ate food provided by Potluck Catering,  an afternoon workshop, quiet band practice and then loud practice.  At the end of each camp-day there was an assembly where we sang “The Anthem” along with the Anthem band.  Throughout the day, Girls were encouraged to participate in activities, but also reminded that they could “pass” if they didn’t feel like they wanted to do or say something.  There was always food to eat, and cool water to drink and the girls were always encouraged to speak up around they’re needs.

The workshops were fantastic.  Monday started with Ora’s songwriting class, the next day it was around image and identity where we had conversation around gender, stereotypes and learned from “Fat Kitty” who says “there is no wrong way to have a body!”.  Wednesday’s workshop in Self-Defense was so powerful and the first exercise was to turn to your partner and say NO three times.  We then learned the vulnerable spots of the body, how to incapacitate an attacker and practiced kicking into a pillow as if it were a foot.  Thursday we learned how to silk screen and printed our band logos onto T-shirts and then Friday we got to play and learn with a women’s drumming group from the Urban Native Youth Alliance.

Every afternoon in quiet band practice we did important band stuff like playing listening games, working on dance moves, and brainstorming ideas.  We talked about costumes, went over the lyrics to our song and learned the singing parts as a band. Loud band practice got consecutively more focused and more tight as the structure of their song formed, and they learned how to count along with the bass player, and go back to the “1” if they got lost. The most amazing moment was when the band “gelled” for the very first time.  I saw heads pop up and look around at each others with the hugest of smiles.  Erika and I looked at each other with wide eyes so full of JOY!

At GRCV there is a whole team of volunteers dedicated to “Drama Trauma” and I saw pretty much every conflict worked out.  Our band didn’t ever need to call on them and I witnessed so much support and camaraderie!

On Saturday at the Rio theater there was a showcase of all of the bands and their songs from the week.  The place was packed, and the audience was stoked.  I sat beaming in the audience as I’m sure were many parents and allies.  What a beautiful and wonderful experience for us all!

I definitely wish to volunteer again next year, and possibly dedicate some energy, or fund-raising for GRCV throughout the year. If you are interested in making a donation of money, time or energy; check out how to do this at their website: girlsrockcampvancouver.ca. There is also a Girls Rock Camp Alliance which supports over 50 camps around the world including a conference and a website with resources, and how to’s.    Check out either of these sites if you are interested in learning the history of GRC or starting up a Girls Rock Camp in your own town. 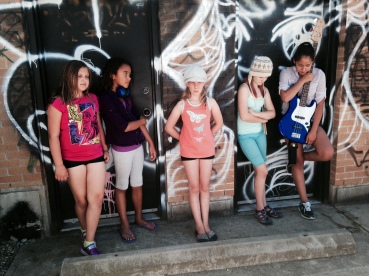 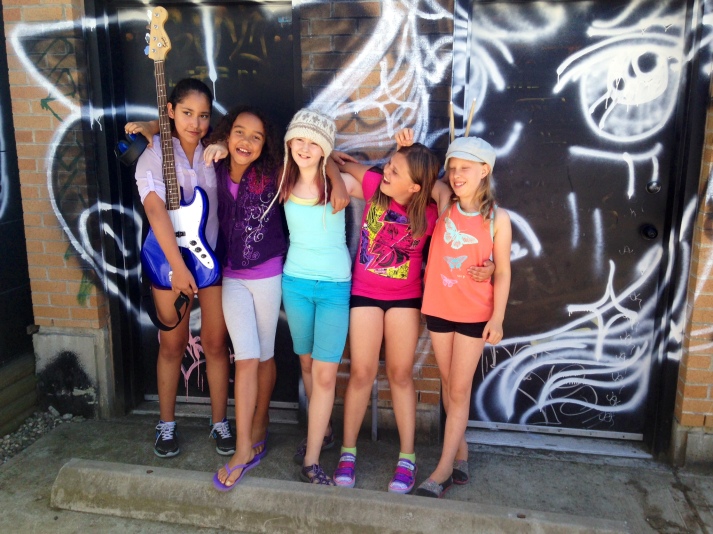 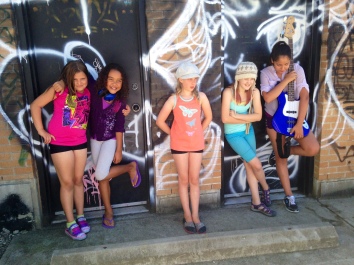 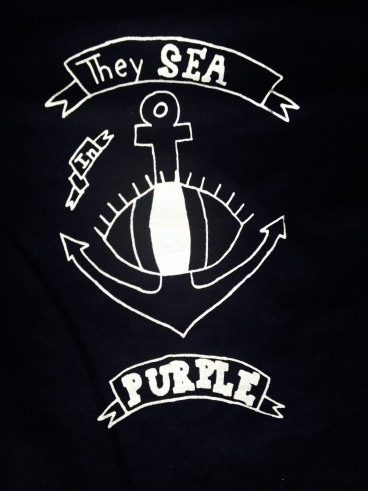